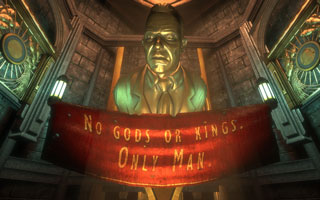 Bioshock: The Collection has finally been officially announced by 2K for release in September.

When we said yesterday that the announcement of Bioshock: The Collection was imminent, we didn’t know just how right we were. This morning, 2K made it official: We’re getting a remastered release of all three Bioshock games.

Bioshock: The Collection will include Bioshock, Bioshock 2, and Bioshock: Infinite, as well as all the single-player DLC for each game. Also included will be a video series titled “Director’s Commentary: Imagining BioShock,” which features Ken Levine and others talking about the series.

There are a couple of caveats, though. The collection will not include multiplayer for Bioshock 2. Additionally, Bioshock :Infinite isn’t being remastered on PC. 2K says that this is because “it already meets current-gen console standards and runs smoothly on high visual settings.”

Game Informer learned (and confirmed with 2K) that if you already own Bioshock, BioShock 2, and/or Minerva’s Den on PC, you’ll receive the upgraded versions for free. That’s a nice boon for PC gamers.

You can get all the info on the collection in this post on the 2K blog.

Bioshock: The Collection is set to release for PC, PS4 and Xbox One on September 13, and will carry a retail price of $59.99.