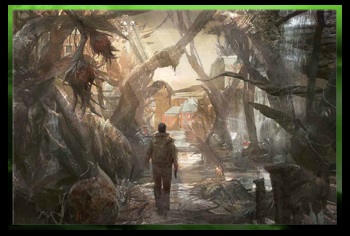 Earth No More is back, and the creator of Duke Nukem Forever wants you to help pay for it.

3D Realms announced Earth No More, a multiplatform FPS being developed in conjunction with Finnish studio Recoil Games, in 2007, but then suspended work on it indefinitely in 2009 as it struggled under the weight of Duke Nukem Forever. Recoil confirmed it was off the project last year, but 3D Realms is getting ready to restart development, with financial assistance from you – the “crowd.”

Earth No More recently turned up on Gambitious, a crowdfunding site devoted specifically to videogames. The project isn’t live yet, so the funding goal and “perks” haven’t been revealed, but the 3D Realms name is definitely on it. “Mankind’s relentless destruction of Earth awakens a biological response from deep within the planet’s crust that threatens an environmental apocalypse,” according to the one-line description of the game.

The Radar Group, “an original IP incubator and production company” co-founded by 3D Realms co-owner Scott Miller which lists Earth No More as one of its projects, offers a little more insight into the game. “Earth No More does away with the ‘lone-hero’ shooter archetype, instead focusing on the dynamnic between an ensemble cast that must learn to work together to survive the threat of an environmental extinction event,” the game description says. “As Will Foster, a DHS chemical weapons specialist, you are among the first to respond to a gas attack on Washington, D.C. However, it soon becomes clear that the gas attack is a cover-up for something much more sinister.”

Earth No More is being made for the Xbox 360, PlayStation 3 and PC, according to the site, but the developer is currently “unannounced.”