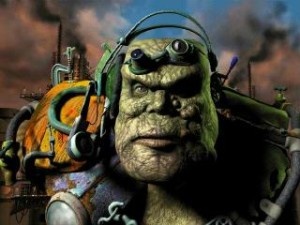 Fallout 3 is a month away, and that means it’s time to start boning up on the backstory of the greatest post-nuclear role-playing game of all time.

As anticipated as Fallout 3 is, it’s also the follow-up to a niche RPG that’s almost ten years old, meaning that a lot of people who will be playing it won’t have much, or any, experience with the original. And while tromping through the irradiated wasteland will no doubt be good family fun on its own, gamers unfamiliar with the history of the Fallout universe will inevitably miss out on various details and asides that reference the earlier titles.

Fortunately, UGO has addressed this problem with two separate retrospectives, the first a Fallout timeline detailing the history of the world through the events of the first two games, and the second a look back at some of the most memorable characters in the series, including Frank Horrigan, Harold the Ghoul and Dogmeat. The articles are fun to read, and more importantly, they’re great primers for gamers who never had the opportunity to enjoy the first two Fallout games and handy refresher courses for those who did but may have forgotten a few details over the years. It’s an easy way to make sure you don’t miss out when the Big One comes.