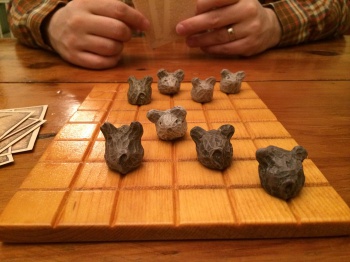 A new strategy game based on the Mouse Guard comics has come to Kickstarter: Mouse Guard: Swords & Strongholds is a light abstract strategy game that is played in 10-20 minutes. Based on the game actually played by the mouse warriors of David Petersen’s comics, the game has players maneuvering a set of pieces across a notched board using cards. The individual cards give different pieces different move types at any given time, making the game an adaptable, fast-moving exercise in strategy. Luke Crane, the game’s designer, previously made the award-winning roleplaying game based on the Mouse Guard world.

David Petersen’s Mouse Guard comics have done quite well over the years, and it’s certainly a foregone conclusion that there will be fan support for the project.

In the game, players maneuver their game pieces around a board in an attempt to either capture their opponents’ pieces or reach their opponents’ end of the board and set up a stronghold. After a piece moves, the players can use a card from their hand to either make the piece into a stronghold, swap with an enemy piece, dismantle an enemy stronghold, or push around enemy pieces. Enemy pieces pushed off the board or into a friendly stronghold are destroyed. The game looks fast-moving and accessible – ideal for two-player and abstract game fans.

You can check out Mouse Guard: Swords & Strongholds on Kickstarter. The project ends August 7th.

The Power of Darth Shakespeare: Day 3 of CONvergence Cosplay