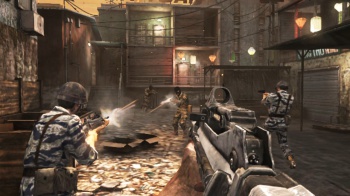 In a move that surprises exactly no-one, Activision announces the tenth game in the FPS franchise that just won’t die.

Activision’s financial report revealed a lot of surprising data about the record-breaking sales the company saw in 2012. Very unsurprising, though, was the announcement that 2013 would see another instalment in Activision’s long, long running Call of Duty franchise. Activision Publishing CEO Eric Hirshberg confirmed that the game will see release in the forth quarter of this year, and while he expects the game to do well, he expressed doubts that it will be able to match Black Ops II’s record-breaking sales.

No concrete details have emerged about the game as of yet, but considering Activision announced earlier that it was working on a next-gen Call of Duty title, and current rumours speculate the release of new consoles by the end of this year, it is possible the next Call of Duty will be available on next-gen consoles. It is presumed that Infinity Ward will develop this title, as developers Treyarch only just pushed out Black Ops II a few months ago.

“There is increased volatility this year due to the ongoing console transition, which makes predicting the future more challenging than during normal years in the cycle. For Call of Duty, consistent with our past practices, we are planning for the mainline release in Q4 to be down versus 2012,” Activision CFO Dennis Durkin added.

Call of Duty: Black Ops II is the latest game in the Call of Duty franchise, releasing in November of last year. Four DLC packs are planned for the game over the coming year, with the first one, Revolution, having already been released last month.