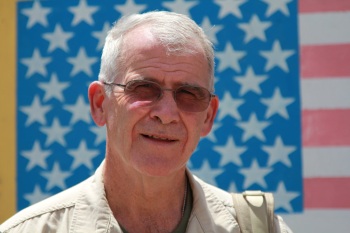 Activision says it “made sense” to use the Iran-Contra colonel as a consultant on the upcoming Call of Duty: Black Ops 2.

Oliver North is a polarizing figure, to put it very mildly. Back in the 80s, he was the face of the Iran-Contra scandal, an unprecedented political disaster in which the United States was busted selling weapons to Iran in exchange for the release of American hostages and then funneling the money to the Contra rebels in Nicaragua. President Ronald Reagan rather improbably denied knowing anything and while several officials with his administration were eventually indicted and convicted of various charges (which were later vacated or pardoned), it was Lt. Colonel Oliver North, who steadfastly refused to roll over on anyone, who became the face of the affair.

He’s a hero to some and a traitor to others, but either way he’s also a consultant on the upcoming Call of Duty: Black Ops 2, and that apparently has some people in a knot. Activision says his participation only makes sense, however, because like him or not, he was a central figure in the real black ops community.

“When we create the fictions that we create, we do a bunch of research and try to talk to subject matter experts on it. And part of that research is reading and watching documentaries and movies and everything else,” Treyarch studio boss Mark Lamia told Kotaku. “[North] rises to the top as someone who was probably, obviously the most well-known covert operations [person]. So it made sense for us from a game development point of view to spend the time and be able to talk to [him].”

I would have to agree. North may or may not have broken a whole pile of laws, but his real crime was simply that he got caught. It sounds cynical, but the fact is that governments do unsavory things all the time; we just happen to live in such a “reality”-obsessed culture that those deeds become entertainment fodder faster than ever before. If Treyarch is building a game around the real-life black ops world of the 1980s, and one of the central players from that period is willing to offer insight into it, it would be foolish not to take advantage.

Interestingly, Lt. Col. Hank Keirsey, the military advisor on the Call of Duty franchise since the 2004 release of United Offensive, briefly stepped up to defend North before being shut down by an Activision public relations rep. Suggesting that modern gamers likely consider North a traitor simply because he’s on Fox News, Keirsey said, “Do they know what he really did? I guess I’m out of line even coming into the interview, but the man was involved in a crux of history…” at which point he was “waved off” by the PR guy and left the room.

A polarizing figure indeed. Call of Duty: Black Ops 2 comes out on November 13 for the Xbox 360, PlayStation 3 and PC.