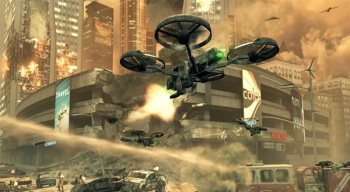 After rolling out executives from Warner Bros. Interactive and Ubisoft at its massive presentation last week, Nintendo may have scored support from one of the biggest videogame publishers in Activision. Eric Hirshberg, head of Activision Publishing, stated the company will get behind Nintendo’s new console, and pointed out a connection between Call of Duty Elite’s offerings and the second screen in the Wii U Gamepad. Hirshberg balked at providing details, but many assume Black Ops 2 is set to release on Wii U.

“We take out time to get our ducks in a row before pulling any trigger. We don’t have announcements today but we will be supporting Wii U,” Hirshberg said before he was quick to position Activision as the thought-leader on using peripheral screens.

“We were there with second screen enhancements with Call of Duty Elite last year and one of the primary uses we’re finding comes through the tablet and through the smartphone,” he said. “People are using it in that “between-games” way that I think now you’re seeing that kind of rhetoric with the controller from Nintendo as well as the SmartGlass presentation from Microsoft. So it’s great that others are jumping on board and enhancing that idea but it’s something we were doing last year with Elite.”

The comments from Treyarch studio head Mark Lamia were even more interesting. “We obviously have been a Nintendo developer for many years and have created many Call of Duty games on the Nintendo platform. [Wii U] is clearly a more powerful platform than its predecessor,” he said.

Nintendo also stealthed-announced a Wii U “Pro Controller” which looks identical to a Xbox 360 controller, seemingly perfect for porting current generation games. “They announced a Pro Controller which appears to be a controller that would be really good for first person shooter games. It just so happens that’s what we specialize in,” Lamia said.

Treyarch’s designers were also excited about the possibilties of the new console’s scheme. “[The Wii U] has that touch display device and you think about the kinds of things you might be able to do and – without getting into specifics – I absolutely have given it consideration and thought. We’re game developers and it’s a new piece of hardware and technology, so we’re always thinking about that stuff.”

I’m not sure what all this adds up to, but Nintendo may have secured a partner in Activision. If true, and Black Ops 2 ships with a Wii U version, Nintendo’s fortunes this holiday just got a lot cheerier.