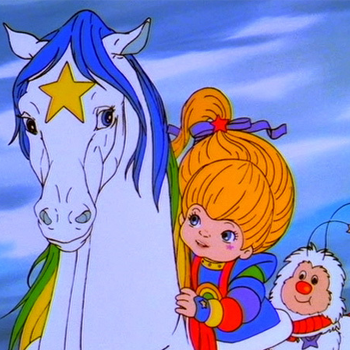 The nostalgia-reboot scene gets a little more colorful

Reviving children’s properties of the 80s and 90s is big business these days, but only recently has the trend moved beyond boys and action figures to female-centric properties like the live-action Jem & The Holograms movie and the new Sailor Moon reboot (and Mattel’s Barbie movie, though that’s much older than most of the others).

Well, score one more for the Pink Aisle: Actress Emily Osment has revealed via Twitter that she’s voicing the titular character in a reboot of the animated series Rainbow Brite, later showing fans the title page of an episode script titled Cloudy With A Chance of Gloom as a further tease.

First created in 1983 for Hallmark as a way to get the greeting card company into the licensed character business, Rainbow Brite is a young girl (originally named “Wisp”) who serves as the ruler and protector of Rainbow Land, a magical kingdom where her allies the Sprites and Color Kids mine Color Crystals that serve as the source of all pigmentation in the universe. She uses a magical Color Belt, a talking horse named Starlite and sundry other powers to battle the forces of evil in Rainbow Land, on Earth and other realms — primarily Murky and Lurky, two villains who aim to destroy all color.

The character’s original animated series only lasted for 13 episodes, but was popular in syndication and more successful in the form of action figures, stuffed dolls and other merchandise. In 1985 there was a feature film, Rainbow Brite & The Star-Stealer, which sent the heroine to outer space to battle aliens and an intergalactic tyrant. A reboot was attempted once before in the mid-90s, but met with little interest.

Fantastic Four Reboot Movie Won’t Be Based on Any Comics