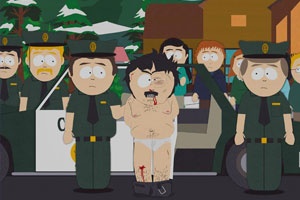 To most decent, civilized human beings, Chuck E. Cheese’s is a place where one can take their spawn out for a night of skee-ball, animatronic nightmares and a protein-based food substance that is referred to only as “pizza,” but your stomach tells you otherwise. Truly, it is a place where a kid can be a kid. Unless of course, you find yourself at Chuck E. Cheese’s located in the Mid-West where law-enforcement officials are dealing with a rash of violence erupting from the family oriented pizza parlors and no, it’s not because little Jimmy couldn’t respect the token line.

In Brookfield, Wisconsin, no restaurant in the city has received more calls to the police department in the last year than good ol’ Chuck E. Cheese’s. Of the 12 altercations that officers have had to respond to, the biggest brawl occurred in April 2008 when no less than 40 people were involved in a massive free-for-all. What’s worse is that according to Brookfield Police Captain, Timothy Imler, “There’s a biker bar down the street, and we rarely get calls there.”

Chuck E. Cheese’s, which was founded in 1977 by industry legend Nolan Bushnell, has gone from a single location in San Jose, California, to 538 locations across the US. Richard Huston, executive vice president of marketing for the chain’s parent company, CEC Entertainment, claims that these types of altercations are “atypical,” saying that he’s only heard of four to five significant incidents between parents this year, though law-enforcement officials in certain parts of the country say otherwise. Huston realizes the danger possessed by these incidents, saying “Even one is just way too many.”

What’s to blame for the outbreak in “Cool Chuck” related violence? Security experts point to the “mama-bear instinct,” as the loud noises, thick crowds and emotions of children’s birthday parties (hosted by the establishments) heighten parents reactions to what they see as threats to their children. Alcohol may also be to blame as 70% of Chuck E. Cheese’s serve wine and beer in order to give parents more of a reason to bring their kids for a good time.

In the case of Brookfield, Wisconsin, Chuck E. Cheese’s has surrendered their liquor license and has placed armed security guards within the establishment. Milwaukee Alderman Tony Zielinski, who originally called for the relinquishing of the restaurants liquor license isn’t particularly happy about that either, saying “It was like something out of a Quentin Tarantino film. What parent is going to take their kids to a place where there is alcohol and pistols being brandished?”