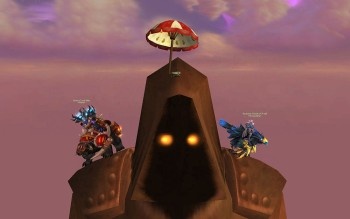 The crazy-ass bastard who sued Sony over a PlayStation Network ban and then launched suits against Microsoft and Nintendo has fired one last litigational salvo: He’s suing Activision Blizzard because World of Warcraft isn’t fun enough.

The story of Erik Estavillo should be familiar to all of us by now: The agoraphobic gamer filed a lawsuit against Sony in July for banning him from the PlayStation Network for “inappropriate behavior” while playing Resistance: Fall of Man and then last week began a pair of sequel lawsuits against Microsoft and Nintendo for the Red Ring of Death and the 4.3 update to the Wii firmware respectively. But that’s not the end of it; today he announced his “final lawsuit,” filed against Activision Blizzard because World of Warcraft isn’t fun enough.

I make that point twice because although it may sound like a joke, it’s not. Estavillo’s complaint essentially breaks down like this: Blizzard charges too much money for World of Warcraft, a problem exacerbated by the fact that the game doesn’t let people move around fast enough until they’ve sunk enough time and money into it to buy a mount or a “teleportation stone.” But mentally ill people who rely on MMOGs as their primary form of entertainment and contact with the outside world have a tendency to die when they’re deprived of them and since Estavillo himself is mentally ill and doesn’t want to end up like all the other dead MMOGers out there, he wants the game “fixed.”

Oh, and he wants a million bucks in punitive damages “for creating a game which hurts gamers rather than being a bridge of entertainment for them to pursue happiness.”

But wait, there’s more! To support his case, Estavillo has subpoenaed both Martin Lee Gore of Depeche Mode and actress Winona Ryder to testify. “[Gore] will be a witness on ‘alienation’ and the ties it has to World of Warcraft, since he himself has been known to be sad, lonely, and alienated as can be seen in the songs he writes,” he explained in an email to The Escapist.

It’s quite clear at this point that one of two things is happening here: Either Estavillo is a total nutcase – not just agoraphobic, OCD and all the rest, but completely out of his tree – or these lawsuits are a buildup to some sort of unfathomable attention-whoring punchline. It’s a dangerous game; according to Rule 11 of the Federal Rules of Civil Procedure, people who knowingly bring a frivolous lawsuit before the courts can be slapped with some pretty hefty fines.

And yet… Is there a third possibility that we’re overlooking? Could all of this in fact be another stealth ad from the wild and crazy guys at the Dante’s Inferno marketing team? Is it sloth? Will it be greed? Is it possible that this series of insane lawsuits will turn out to be the most insidious advertisement ever? Of course not – although as explanations go, it makes about as much sense as anything else involved in this case. (And if it is, I’m totally buying the game just for the sheer awesomeness of the marketing.)

Estavillo’s complaint can be read here (page 1, page 2) while the subpoenas, just to prove that they do in fact exist, are here (Gore, Ryder).