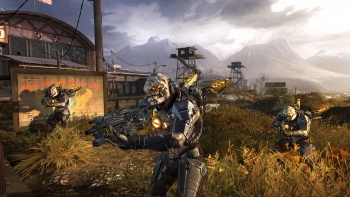 Erik Estavillo is suing Sony over being banned from PlayStation Network, claiming that the company violated his right to free speech and has caused him pain by removing his only form of socialization, as he suffers from agoraphobia.

PlayStation Network is important to Erik Estavillo, so when the San Jose resident was banned for inappropriate behavior in Resistance, he had to do something to get it back: file a lawsuit. Estavillo, then, is suing Sony for repressing his constitutional right to free speech and causing him pain and suffering.

The lawsuit claims that Estavillo was “exercising his First Amendment Right to Freedom of Speech” in the game’s “public forum” (guessing this refers to the official Resistance message board?) when moderators, who the suit alleges are biased, banned him from Resistance and PlayStation Network altogether.

Taking away his right to free speech would be one thing, but in addition to that, the suit claims that the ban “has caused pain and suffering to an already disabled plaintiff.” Estavillo, it seems, suffers from Obsessive-Compulsive Disorder, Panic Disorder, Major Depression and Crohn’s Disease. To ban him from PSN robbed him of one of the few sources of pleasure in his life, as Estavillo is an agoraphobic (he’s afraid of crowds) who “relies on [PSN] to socialize with other people, since it’s the only way the plaintiff can truly socialize,” the suit states.

The suit states that Estavillo has medical documents to prove that he really suffers from all those conditions, and okay, if he’s not lying, that really sucks. But this is just plain ridiculous. Estavillo is asking for $55,000 in punitive damages as well as “pain and suffering damages.”

Read over the lawsuit for yourself over at GamePolitics.