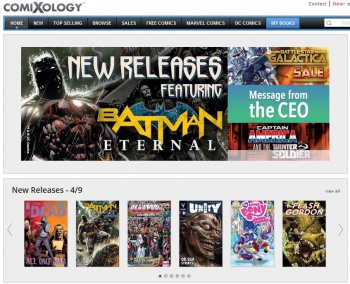 Amazon will soon acquire comiXology, the world’s largest digital comics storefront and one of the top performing mobile apps.

Have you ever bought a digital comic book? If so, it’s probably safe to say you bought it through comiXology. Its digital comics storefront is the biggest worldwide, offering roughly 50,000 comics from over 120 publishers. It’s effectively the Steam or iTunes of digital comics, although comiXology won’t be operating as a independent brand much longer. Co-founder and CEO David Steinberger has just announced that the company will be acquired by Amazon later this year, and will operate as a digital comics subsidiary.

“More than seven years ago, John D. Roberts, Peter Jaffe, and I set out to connect people to comic books and graphic novels they’d love, and we’re so excited about how far we’ve come,” Steinberger wrote. “We have long had the goal of making every person on the planet a comics fan. With Amazon’s help, this crazy goal is more possible than ever before. With the Kindle, Amazon has shown a passion for reinventing the reading experience, just like comiXology has shown for comics and graphic novels.

“ComiXology will retain its identity as an Amazon subsidiary and we’re not anywhere near done ‘taking comics further.’ We are confident that – with Amazon by our side, who shares our desire for innovation and a relentless focus on customers – we’ve only just begun.”

ComiXology first began as an online comic book community, slowly transitioning from a website displaying weekly listings to a full-blown digital storefront. It was comiXology’s digital comics apps that really helped it stand out, allowing readers to purchase issues and graphic novels across Android, iOS, Kindle, and Windows 8 devices. In 2013, comiXology for iOS was one of Apple’s highest performing apps, being only one of two non-games to reach the Top 20 by gross sales.

ComiXology, like Amazon itself, recently branched into indie publishing by allowing comic creators to upload and sell their work. Considering that Amazon’s self-publishing branch CreateSpace allows for both digital and print-on-demand products, this acquisition could create several interesting opportunities for comic writers and artists.

While comiXology will maintain its brand, presumably it will see further integration with Amazon’s services. Although the full extent remains to be seen, we’ll likely find out once the acquisition is completed in the second quarter of 2014.