That Super Value Mega Pack of men’s underwear you just bought on Amazon? Probably handled by a robot.

Amazon is reducing stress on its human warehouse fulfillment center workforce by bringing thousands of robots into ten North American facilities this month.

The new centers are part of Amazon’s massive fulfillment center network; any time you buy something on Amazon labeled as “Sold by Amazon.com,” or “Sold by X, fulfilled by Amazon,” it’s coming from one of these centers.

So what’s inside the revamped warehouses? Amazon now has a fleet of over 15,000 robots, all of which can lift over 700 pounds (they weigh 350 pounds each). The bots look like iRobot Roomba’s on steroids, with a round, low-profile body. The new warehouse system works by having the robot lift entire shelving units instead of specific products; the robot then brings the shelving unit over to a human fulfillment center worker, who takes the ordered product off the shelf.

The new system, which keeps human employees out of the most of the warehouse, allows shelves to be placed closer together, effectively doubling the amount of product that a warehouse can hold. 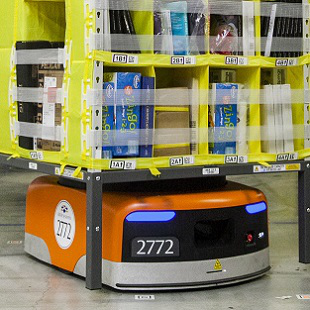 These robots are the first real fruit borne from Amazon’s $775 million acquisition of Kiva Systems in 2012. Kiva has been in the warehouse robot game for years, supplying box-grabbin’ Wall-E machines to Zappos since the site started selling shoes.

Other new features in the retooled warehouses include a massive “Robo-Stow” robotic arm that can move larger products within the warehouse, and a retooled vision system that allows for a new truck of inventory to be unloaded in as little as 30 minutes. Human employees aren’t left out in the cold, either, as their computer systems have been revamped as well.

While the robot army will (probably) eventually cut down on human workers in such warehouses, Amazon is still adding 80,000 seasonal workers for the holiday season this year.