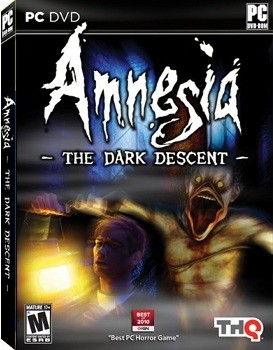 The awesomely terrifying Amnesia: The Dark Descent is just a few days away from getting a boxed retail release in North America.

Amnesia: The Dark Descent is widely regarded as the most frightening thing to happen to videogames since E.T. Incident of nineteen-hundred-and-eighty-two. The Frictional Games release got a lot of attention for doing a masterful job of scaring players and not just startling them, which is no doubt why it is now being crammed into boxes and put it up for sale in stores.

The box art, if that really is the box art, isn’t great, but it is a nice option for those weirdos out there who think that a box and a disc are an important part of the whole “game ownership” experience. 1C Company had published a retail release of the game in Russian and Eastern Europe, but the North American edition is being put out by THQ.

The award-winning Amnesia: The Dark Descent has already racked up more than 200,000 copies sold via digital distribution so the retail release may not set the world on fire, but I’m certainly looking forward to it. The game will hit store shelves on February 22 and is expected to sell for $20. To learn more, check out amnesiagame.com.