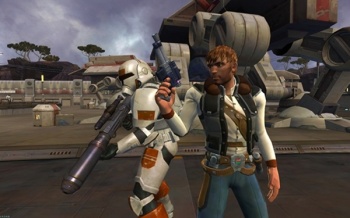 The MMO officially launches tomorrow, but servers are already full with folks who pre-ordered TOR.

With the growth of free-to-play games overtaking new and old MMOs alike, The Old Republic might be the last hurrah for traditional subscription MMOs. Remember back in the 90s when getting customers to pay a monthly fee was a novelty that many gamers’ thought would never catch on? World of Warcraft changed all that in 2004 – becoming the gold standard for how all future MMOs will be judged. All MMOs released since 2004 have failed to kill Wow and most have now abandoned asking for a monthly fee, but many believe BioWare’s voice-acted Star Wars epic might be able to stick with a subscription, at least for a while. A financial analyst has taken the comparison of WoW and TOR to an extreme by looking at the numbers of WoW‘s servers and extrapolating an estimate of how many people are playing The Old Republic right now.

Doug Creutz from financial firm Cowen & Company reported today that TOR has opened up 140 servers (77 in the US and 63 in Europe) to customers who’ve already forked over the cash. Based on Creutz’ experience, those servers feel fuller than WoW‘s. From those two pieces of information, he estimates that 1 million to 1.5 million are already playing The Old Republic.

How did he get there? Well, we know that WoW has 491 servers in operation in North America/Europe and he estimates that Wow‘s population in those territories is around 4 to 4.5 million.

“Based on the number of servers now in operation, and the relatively high densities thereon, we feel fairly comfortable estimating that the game already has in excess of 1 million players, and potentially could have as many as 1.5 million,” wrote Creutz in the report.

Crutz is quick to point out that these numbers will not necessarily translate to paying subscribers, but he’s confident that 1.5 million playing TOR before the game has even launched means his prediction of 2 million paying customers for Electronic Arts and BioWare in 2012 is still spot on.

The Old Republic launches on PCs tomorrow December 20th in both North America and Europe. Check out Steve Butts’ preview of the Republic forces in the beta here.