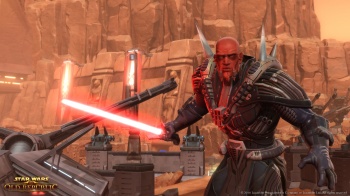 According to analyst Mike Hickey, investors aren’t prepared to jump on board EA’s Old Republic just yet.

Let’s not quibble: If a developer gets the right formula to bottle lightning, an MMO can be ridiculously profitable. There probably isn’t a single gaming company on the planet that doesn’t look at Blizzard’s obscene monthly revenue from World of Warcraft without going green from envy. Launching a stand-alone game is almost always financially risky – what if gamers don’t buy it? – but a revenue stream from an MMO is practically a sure thing once it gets going.

But that’s ignoring the other side to the equation: Not only are MMOs prohibitively expensive to operate (manpower for customer service, bandwidth, power and maintenance for servers), making – and launching – an MMO may be one of the hardest things to do in the entire business. Just look back at the countless titles that were supposed to be the Next Big Thing (and weren’t): Age of Conan, Warhammer Online, Vanguard, Lord of the Rings Online.

Even a beloved gaming company – BioWare – working with one of the most popular IPs in history – Star Wars – isn’t a sure thing. And analyst Mike Hickey says that EA’s investors aren’t convinced. The Janco Partners analyst says that while other factors regarding EA’s financial future – the Playfish acquisition and the Activision lawsuit, to name two – could be hurting the company’s shares, investors are mainly wary of the publisher’s ability to launch a successful MMO.

“We believe many investors are betting against SWTOR achieving market success, provided the company’s (Warhammer Online from Mythic) and industry’s track record at releasing successful new MMOs,” says Hickey – and indeed, Mythic’s Warhammer MMO is a very good example of the risks inherent in launching an MMO. It was a title released by a proven studio based on a popular IP, and while Mythic swears the title isn’t a money pit, it certainly failed to live up to expectations.

With the failure of APB fresh in the memories of investors, a new MMO is seen as risky. Furthermore, says Hickey, factors are betting against SWTOR in particular: The title is rumored to be subscription-based “versus a market that is quickly transitioning to free to play,” previews have been “modest,” and it’s a very, very expensive game (not even counting royalties to LucasArts).

Combined with EA’s growing stake in the game, and it’s not hard to see why investors might be gunshy at the idea of putting their money behind the game.

Of course, if it does come out and promptly lands a couple million subscribers, the same investors will be kicking themselves. No risk, no reward, right?