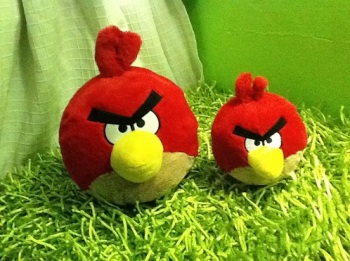 Rovio announced that there are now 500,000,000 digital Angry Birds in the world.

Angry Birds is a game where you drag your finger to slingshot birds across the screen to blow up crates and infuriate pigs. The concept is so simple, yet it’s one of the most successful pieces of software ever created by humans. Finnish developer Rovio said that the sales momentum for Angry Birds has not slowed since the game first appeared on Apple’s App Store in December 2009, and has now expanded to mobile platforms, the PSP and PS3, PCs and Macs and even free in Google’s Chrome browser. Rovio hopes the 500 million units downloaded mark is just one milestone on the path to total Angry Bird domination.

“This is a fantastic landmark achievement for us, and we’re extremely delighted to see such an incredible amount of people enjoying our games,” said Mikael Hed, CEO of Rovio. “We remain committed to creating more fun experiences and bringing exceptional quality to Angry Birds fans everywhere.”

In conjunction with the announcement of half a billion downloads, Rovio also released some bone-chilling statistics:

Rovio has shipped over 10 million Angry Birds-themed plushies and other toys, and is opening a retail store dedicated to the game in its hometown of Helsinki, Finland. The world domination has already begun.