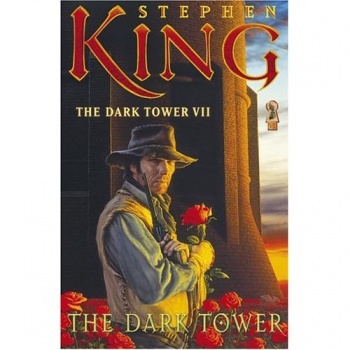 Stephen King’s epic fantasy/sci-fi/western The Dark Tower will likely be putting holes through movie and television screens in the near future.

A deal is being finalized that will bring Stephen King’s The Dark Tower to both big and little screens. As reported by Deadline, big time companies such as Universal are involved in attempts to bring the epic to television and movies with Akiva Goldsman writing the script and Ron Howard on board to direct, similar to The Da Vinci Code film translation. The team behind television enigma Lost – J.J. Abrams, Damon Lindelof, Carlton Cuse – was once working on a translation of The Dark Tower, but couldn’t seal the deal.

The Dark Tower is a seven-book series, with an eighth on the way, released by King from the early 80s through to the mid-2000s. It focuses on gunslinger Roland Deschain as he basically tries to battle an insurmountable evil and save his post-apocalyptic world by making a trek to the mysterious and mystical Dark Tower, where the spider-like Crimson King resides. The story has the strong feel of a western, but also incorporates elements of magic and sci-fi and takes place in a wasteland that could be a future Earth (if magic existed) with abandoned oil fields and rusty tanks left over from a previous civilization. The sci-fi and magic comes in with the giant laser weaponry and psychic mentally challenged children.

Some would say The Dark Tower is King’s answer to J.R.R. Tolkein’s Lord of the Rings, but with a dark/horror feel as would be expected from the author. It’s most recently been in geek consciousness due to the awesome comic prequel books being put out by Marvel. If books aren’t your thing, but books with pictures are, get your hands on the first Dark Tower graphic novel collection and give the series a try. It’s sadly a post-apocalyptic world without zombies, but don’t worry, there are plenty of mutants. Hopefully, any possible movie trilogy or television series will remember the face of its father.