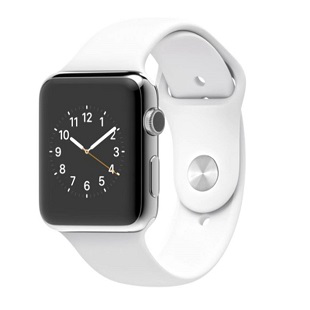 But before we launch into the phones, the Apple Watch needs some attention. Apple made its first smartwatch effort official today, too, and its a solid-looking first effort, indeed.

The Apple Watch shares a lot of similarities with Android Wear devices, including an emphasis on fitness apps, and customizable watchfaces. And Apple is taking custom applications just as seriously, too, like a Starwood Hotel app that helps you check into your hotel, and enables your Apple Watch to unlock your hotel room door. No more lost key cards.

Fitness is also a serious selling point for Apple, and the Apple Watch ships with two related apps. The Fitness app tracks general fitness and movement, while the Workout app is tuned for those actively exercising. The Apple Watch is a fitness tracker as much as it’s a watch, in Apple’s eyes.

Some other important tidbits? You can use the Apple Watch to control your Apple TV, there’s a built-in walkie talkie feature, and it uses magnetically-aligned inductive charging.

As with any Apple product, accessorizing is the name of the game here. There are a number of different strap options, from traditional buckles to metal bracelets. So far these are Apple-made straps, and you can be sure every accessory manufacturer on the planet is going to follow suit with their own designs. 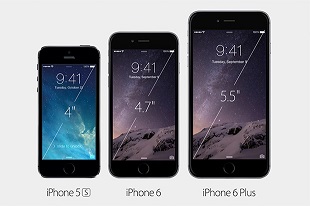 Not One, but Two New iPhones

Now, to the phones! The iPhone 6 and iPhone 6 Plus are both running on iOS 8, and this year’s iPhone reveal marks the first time Apple has brought two legitimately new smartphones at once.

Most of the other hardware in both iPhone 6 models appears to be identical, including a 64-bit Apple A8 processor, M8 motion co-processor (for the fitness crowd), a new 8 MP camera (capable of shooting 1080p video, and slo-mo video up to 240 fps), and a re-designed, rounded aluminum body.

Apple is also making the iPhone 6 and 6 Plus its first devices to support VoLTE (Voice over LTE), which means the phone will treat voice calls like any other kind of data running through the phone. Not only will call quality be improved (on supporting networks), but it also means you can make calls while using data at the same time, and that WiFi calling will be supported (again, on supported carriers/networks). Look for more news on this front from each major carrier going forward.

Both the iPhone 6 and 6 Plus will ship on September 19th, with starting prices of $199 and $299, respectively. The new models push the iPhone 5S down to $99 on contract, and the iPhone 5c is now Apple’s free (on contract) device.

Apple Pay: Removing the Credit Card from the Payment Equation

Apple’s new iOS 8 platform has already been heavily detailed, but one new function (that’s dependent on the new iPhone 6 hardware) is Apple’s new payment system. Dubbed Apple Pay, the new system will launch in October, and ditches your credit card for an NFC chip-based payment method. The new system will work in tandem with the fingerprint reader on the iPhone 6. Credit cards are stored within Apple’s Passbook. Apple has been working with the likes of Staples, Macy’s, Whole Foods, McDonald’s, and Subway to get contactless payments up and running at all retail locations.

For security, Apple Pay does not store the credit card number on your iPhone, nor does it give the number to the merchant through NFC. Instead, Apple creates a standalone account number for your card that is unique to the iPhone. That way, your credit card number stays with you, and only you.

Because of the use of NFC, Apple Pay is not compatible with iPhone 5S, but it is compatible with Apple Watch. Visa, MasterCard, and American Express are all signed up for Apple Pay, so expect to hear details from your card provider soon.

The new payment system also extends to online shopping, as the iPhone 6 will support one-touch payment on a number of websites and apps.

AT&T and Verizon: 10Mbps Is Too Fast For Broadband

Review: What If? Answers All Your (Literally) Burning Questions