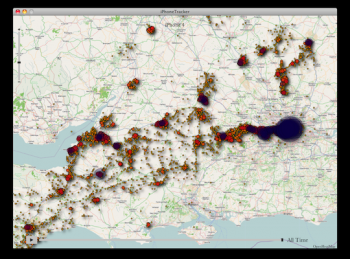 Two Apple customers filed suit in Florida regarding privacy concerns that their iPhones keeps track of where they go and when.

We reported last week that researchers have discovered a file on all devices running Apple OS 4 released in June, 2010 for iPhones and iPads. This file is called “consolidated.db” and it lista all GPS movement of the owner, logged and timestamped without any encryption or protection. At no point is an Apple customer warned that his movements will be tracked this way, and the fact that there is a patent pending for the process means that it was not accidentally included in the system. The file is also transferred to any personal computer that “sync” the device with meaning that friends and colleagues may also have access to an extremely accurate representation of your movements. Vikram Ajjampur and William Devito filed the class action suit in a Tampa, Florida court, but that doesn’t mean the allegations haven’t garnered national attention. Senator Al Franken from Minnesota has written a letter to Steve Jobs, CEO of Apple, asking him to explain the presence of this file. Jobs has not commented publicly on the issue, since it was revealed last week.

“Apple devices download the user location data to the user’s computer when the mobile device synchronizes (“syncs”) or shares data with the computer,” the suit reads. “Apple’s Terms of Service do not disclose its comprehensive tracking of users. Plaintiffs and other users did not provide any sort of informed consent to the tracking at issue in this case.”

Senator Al Franken, who you might remember as Saturday Night Live’s Stuart Smalley, is chairman of the Senate Subcommittee on Privacy, Technology and the Law and so he took it upon himself to write an open letter to Steve Jobs. “The existence of this information – stored in an unencrypted format – raises serious privacy concerns,” Franken wrote. “There are numerous ways in which this information could be used by criminals and bad actors.” I hope Franken wasn’t referring to himself there, I loved Stuart Saves His Family!

I’ve made no bones about the fact that I can’t stand the Apple cult and the people who must run out to buy the latest dropping of white plastic that emerges from those stuck-up fools in Cupertino. While I respect the iPhone as a great device, I dislike the closed platform model and that Apple charges such a premium for its “cool products.”

So I love that this privacy thing might blow up to become a huge black eye for the company that could stand to be brought down a few pegs in the hipster pantheon.

In other news, I really hope the same person doesn’t have access to the locations of most iPhone & iPad users (Apple) and their credit card information (Sony) … oh crap.

Watch your back. That’s all I’m saying.