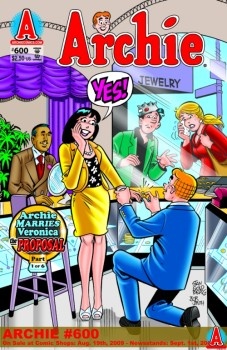 Archie Andrews is getting married and you’ll never believe who he’s chosen for his bride! (No, it’s not Dilton.)

It was revealed in mid-May that perennial bachelor (and waffler) Archie Andrews, whose long-running love triangle with Veronica Lodge and Betty Cooper has been a central feature of Archie Comics, had finally settled on the love of his life and was ready to pop the question. A different question was on the minds of Archie fans around the world, of course: Would he choose the perky, loyal, down-to-Earth Betty, or the exciting, temperamental and ridiculously rich Veronica?

And the winner is… Veronica! The cover of Archie issue 600 has been posted on the official Archie and Jughead blog, showing Archie making his proposal to Veronica while a stunned Jughead and tearful Betty look on. Reggie, presumably, is watching from a distance and formulating a plan to trick Moose into beating the crap out of him again.

I didn’t see this one coming. Not Archie getting married and certainly not his choice of Veronica over Betty. But is it true? Is it really happening? Will Pals n’ Gals be joined by Bored n’ Cuckolded as the next big Double Digest? Bear in mind that Archie was expected to settle on one of the girls back in the 1994 arc Love Showdown but ended up surprising everyone by making a move on redheaded hottie Cheryl Blossom instead.

Let’s also not forget that this is a comic book. Remember when Doomsday killed Superman? Or when Bane broke Batman’s back? Or when it turned out that Spiderman was a clone? Or when Magneto ripped the adamantium out of Wolverine’s skeleton? Or when the Punisher killed Nick Fury? Now guess how many of those world-changing events had any kind of permanence beyond an extended story arc or two. (Here’s a hint: None of ’em.)

It sure looks like Archie is ready to commit, but does he have it in him to follow through? Or will he find some way to tap-dance out of it and return to his carefree, womanizing ways? The saga is set to unfold in a six-issue arc beginning in August with the release of issue 600. “One thing is certain,” the Archie website says. “This will be the biggest Archie Comics story ever!”