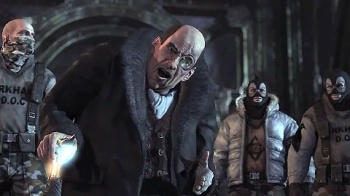 Nolan North is playing yet another treasure seeker in Batman: Arkham City, only with fewer ancient vaults, and more bank vaults.

Nolan North has an awful lot of videogame credits to his name, and has lent his voice to roles as diverse as the treasure hunter Nathan Drake in the Uncharted series, to the fourth-wall breaking antihero Deadpool in Marvel vs. Capcom 3. And now he can add another superhero-focused role to his resume: the Penguin in Batman: Arkham City.

Rocksteady’s Dax Ginn confirmed North’s casting as the bird-themed crime boss in a video about the game. The Penguin is often portrayed as the scion of an affluent Gotham family, the Cobblepots. But in Arkham City it seems that not only is the Penguin not from Gotham, he’s not even from the US; instead, North gives him Cockney accent, suggesting that he’s from – or has at least spent a lot of time in – the rougher parts of London.

It sounds like we might be hearing a lot of that voice too, as Penguin is one of a group of villains who will be putting an awful lot of pressure on Batman. Ginn said that Rocksteady wanted to make the player feel the heat pretty much all the time, so that when he or she defeated one of the game’s rogues gallery – which includes the Joker, Harley Quinn, the Riddler, and more besides – he or she really felt like the Dark Knight.