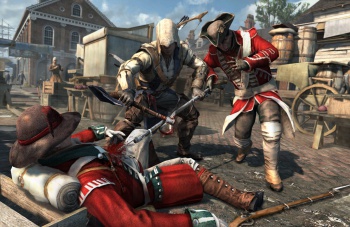 The American Revolution was a “British civil war.”

A bit over 200 years ago, the fledgling Thirteen Colonies of America declared their independence from the British Empire and fought a war to prove it. (Spoiler alert: They won.) Assassin’s Creed III takes place during that American Revolution, and protagonist Connor is on the side of the Minutemen and Sons of Liberty, which means he’s going to be killing more than his fair share of British soldiers who thought that wearing bright red uniforms to one of history’s first modern guerrilla wars was a good idea. (Spoiler alert: It wasn’t.)

Despite that, though, AC3 writer Corey May swears that Ubisoft Montreal doesn’t have any latent anti-British or overwhelmingly pro-American sentiment behind its next climby-stalky-stabby game. The story is “not meant to be [British] loyalists versus [American] patriots,” he said.

“It’s assassins versus Templars. There’s a revolution going on and Connor will experience all facets of it. It’s not as simple as Templars backing the crown and assassins backing the patriots, it’s really two factions at war against the backdrop of another war. I have nothing against the Brits.”

What’s more, says May, is that the actual historical backdrop was rarely so cut and dry as “Americans vs. British.” “It occurs against the backdrop of the Revolutionary war. Everyone back then was a Brit, this was not Americans against British – this was a British civil war.”

That said, Connor is fighting on the Patriot side, and the E3 demo featured him captaining a warship for some naval combat against British forces. Are all those sailors Templars? Probably not. On the other hand, given that Connor is partially Native American, he might not have all that much loyalty or fondness for the colonists that oppressed and murdered that side of his family.

But hey, it’s kind of understandable in a way. After all, Ubisoft itself is French, and they did have that whole Hundred Years’ War thing a while back. And Ubisoft Montreal is French Canadian! I’m just saying, maybe there’s some latent historical resentment going on.

To be fair, though, you were kind of the bad guys.