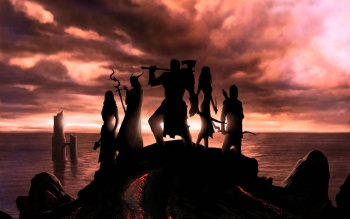 After more than year of speculation, Atari has unveiled a new online Dungeons & Dragons RPG set in the city of Neverwinter.

If you’ve got fond memories of hunting down the cause of the Wailing Death, or battling the dread Githyanki, then the announcement of Neverwinter is probably going to be cause for celebration. But don’t expect to see a lot of familiar faces, as this is not the same Neverwinter you’ve saved in the past.

The game is set in a Forgotten Realms updated for the 4th Edition of Dungeons & Dragons, a century after the world of Faerûn weathered the terrible “Spellplague.” In this new setting, Neverwinter has suffered many disasters, and is now wracked with in-fighting between political factions, as well as incursions from the walking dead.

Neverwinter will use a modified version of the 4th Edition rules. Players will be able pick one of five classes – which aren’t detailed, but judging from the silhouettes on the game’s official site, I’d hazard a guess at Cleric, Wizard, Warrior, Rogue and Ranger – and join groups made up of either other players or computer-controlled bots to take on and complete quests. Players will also be able to make their own adventures and share them with the rest of Neverwinter’s population.

Neverwinter is part of a multimedia launch and will have a companion tabletop RPG and a prequel novel called Gauntlgrym written by R.A. Salvatore, who created the famous Forgotten Realms character of Drizzt Do’Urden, as well as writing the story for the 2004 D&D videogame Demon Stone. Liz Schuh, brand director for D&D at Wizards of the Coast, expects millions of fans to buy the book, and says the company is excited about the prospects for “great digital game experiences.”

Rumors that Atari was working on a Neverwinter Nights MMOG started over a year ago, following the acquisition of Cryptic Studios by Atari at the end of 2008, and got a boost earlier this month following a slip of the tongue from an Atari employee at Gen-Con and some Neverwinter-themed domain name filings. Interestingly though, the game is never referred to an MMOG. Instead it uses the term “co-op roleplaying game,” which might be just another way of saying the same thing, but could also mean that it has a slightly different focus than something like DDO, or Cryptic’s other MMOGs.

If you want to have a look for yourself, you can head over to the game’s official site, but be warned, there’s not a lot to see just yet. Neverwinter is scheduled for release on PC at the end of next year.