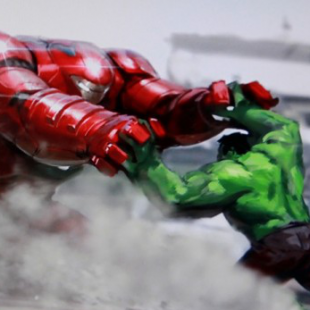 Recently released concept art shows of potential scenes from Age of Ultron including a Hulkbuster bout between Iron and Hulk.

With Marvel Films and Disney staying largely mum when it comes to details about The Avengers: Age of Ultron, fans of the company’s film universe have understandably been eager to see and learn more about the movie. That being the case, recent concept art released by Marvel and ABC may be just the ticket fans have been looking for.

The art, which depicts several characters and potential scenes from the film, contains the first official looks the studio has provided of its versions of Elizabeth Olson’s Scarlet Witch and Aaron Taylor-Johnson’s Quicksilver. Olson’s Scarlet Witch looks as though she’ll (understandably) be forgoing her character’s costume from the comics, while Johnson’s Quicksilver looks about as speedy as you’d expect.

The remainder of the art depicts what appears to be a lab sequence, some cityscape destruction with Black Widow and Hulk in the foreground and, perhaps most excitingly, a battle between Hulk and Iron Man wearing what looks to be Hulkbuster armor. Considering that Iron Man and Hulk frequently stole the spotlight in The Avengers, you can count us as being hopeful that this fight sequence actually makes it into Age of Ultron. Granted, it’s not like Disney and Marvel have ever demonstrated any sort of aversion to climactic character bouts, but we’re still going to keep our fingers crossed just in case.

So what do you guys think? Do these first glimpses sell you on Age of Ultron? Does it look to you like Marvel will be doing justice to Scarlet Witch and Quicksilver? Basically, we’re curious to see what you take away from these brief glimpses into the developing film.