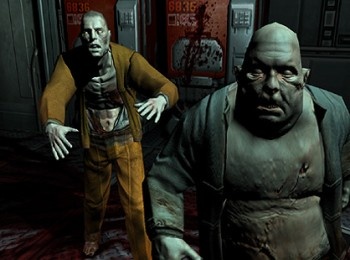 I’m not sure what the point is, but id Software has hired award-winning British sci-fi author Graham Joyce to handle the writing duties on Doom 4.

Joyce has written 14 novels since 1991, along with numerous shorter works, spanning science fiction, fantasy, horror and “mainstream literature.” His second novel, 1992’s Dark Sister, won won the British Fantasy Award, a prize he’s taken three more times since, along with two Imaginaire Awards and a World Fantasy Award for the 2002 novel The Facts of Life. As well as being a successful author, Joyce also teaches creative writing courses at Nottingham Trent University.

All of which could easily lead a person to wonder what he’s doing working on Doom 4. The stories in Doom 1, 2 and 3 certainly weren’t anything that any self-respecting author would take credit for, and that’s always been part of their admittedly odd charm: The complete lack of any story beyond “space marine fights demons.” Yet here we have a real author, who’s won considerably acclaim for his work, sitting down to craft the story upon which Doom 4 will be built.

Filled with understandable doubt, CVG contacted Joyce to confirm that he is in fact working on the new Doom project. It’s all true, although NDAs prevent Joyce from revealing anything more. “I can say that id have hired me to help develop the storyline potential,” was all he’d admit to. id CEO Todd Hollenshead said back in August that he’d like to do another Doom movie, possibly based on the game currently in production, and if that’s a serious consideration it could be a very powerful incentive to bring a real writer on board to help ensure the next Doom movie is a step up from the last one.

Is id planning to tell a real story in Doom 4? And if so, will it work? Doom and Doom 2 are among my favorite games of all time, in large part because they allow me to kill stuff without thinking about anything else. No stats, no reading, no narration, no cut scenes, no nothing except an endless supply of bullets and bad guys. And while Doom 3 and Resurrection of Evil fell flat in comparison, the absence of a decent story (or any kind of story) wasn’t the problem. I’ll be thrilled if id and Joyce can team up to create a gripping tale of horror and survival in a demon-infested future, but first and foremost I want to see some balls-out demon holocaust massacre action. Anything beyond that is secondary.