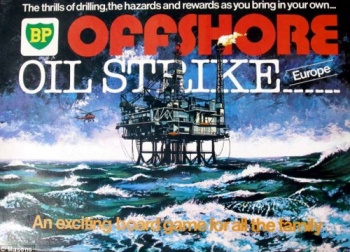 I’m sure that forty years ago, someone at British Petroleum thought that an offshore oil rig board game was a great idea.

And speaking of BP, it seems that the recent tragedy in the Gulf of Mexico has spurred interest in a “rare” and “obscure” officially-licensed BP board game from the 1970s called Offshore Oil Strike. In the game (complete with surprisingly ominous box art), player must manage their own offshore oil rigs to rake in the big bucks while being wary of “hazard cards” that could spell doom. Like, for instance, this one:

Considering that BP has spent an estimated $3 billion (£1.9 billion) since April fighting the actual oil spill in the Gulf of Mexico, I think those numbers need to be slightly revised somewhat, don’t you?

The game itself apparently was a flop at the time – hence its obscurity – but thanks to BP’s modern-day notoriety in causing one of the worst man-made natural disasters of all time, is now showing up on eBay. One can only imagine that BP wishes that this game, like so much else, would just disappear forever beneath the waves.

Oh well, seemed like a good idea at the time, yeah?

Sony Says Studios Will Help Make the Next PlayStation

On Kinect and PlayStation Move