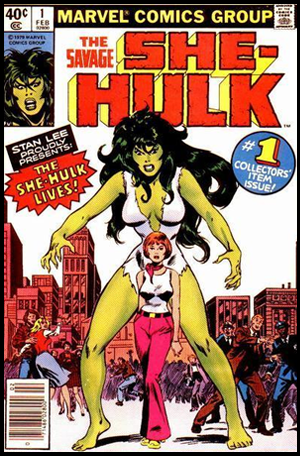 Warner Bros more or less annointed David Goyer as the “guru” of their work-in-progress DC Universe movies based on his close working relationship with The Dark Knight’s Christopher Nolan and on Nolan himself moving out of the DC-adaptation game for things that actually interest him. But an unexpected internet outrage flare-up today (which was supposed to be a celebration of the exceptionally-silly, excessively-90s title for the Man of Steel sequel/Justice League prequel) may have them regretting that decision.

Multiple comics/film sites are registering outrage (or, at least, grim bemusement) at comments Goyer made during Tuesday night’s Scriptnotes Podcast discussion of superhero movies. Riffing off of host Craig Mazin opining that the character’s real name should be “Slut-Hulk” because of her more feminine (than The Hulk) build, Goyer offered that “She’s still pretty chunky. She was like Chyna from the WWE.” He then went on to theorize that “Shulkie’s” conception was an attempt to give Marvel fans “A chick you could f*** if you were Hulk, you know what I’m saying?”

He also questions whether or not a man created the character, suggesting that he doesn’t know – and while sites like The Mary Sue and best-selling comics author Gail Simone have been hitting him hard for the surprisingly blunt sexism on display, others like Badass Digest are pointing out the less important (but still troubling) fact that Warner Bros “comics guru” doesn’t actually seem to know that much about comics – even the ones he’s supposed to be helping bring to screen.

For example, that She-Hulk (a female lawyer who got augmented Hulk powers via a blood-transfusion from Bruce Banner) was created by none other than Stan Lee and John Buscema as a preemptive measure to prevent producers of the Incredible Hulk TV series from making knockoff characters of their own (something you can just look up,) and that she’s not (in mainstream Marvel canon) a sexual partner for The Hulk – mostly because they’re cousins. And while the character’s cult-fave 80s series was famous for it’s sexy “cheesecake” artwork, it was in service of a self-aware humor gimmick (She-Hulk could break the fourth wall and talk to the audience) making fun of comic tropes like pointless “sexy” posing/costuming.

Goyer is credited with the “story and screenplay” of WB’s upcoming Batman v Superman: Dawn of Justice, though said screenplay is currently being rewritten by Chris Terrio. The film is currently scheduled to open on May 6, 2016 opposite Marvel’s Captain America 3.