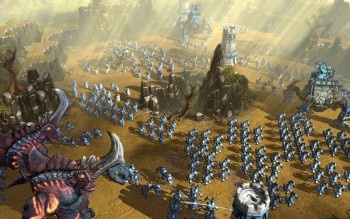 BattleForge, a real-time strategy title with a collectible card game element, is now available as one of Electronic Arts’ “Play4Free” games.

BattleForge supports single-player and cooperative multiplayer gaming for 2-12 players, ranked and unranked PvP dueling and a wide range of social and community-related options. The free version of the game includes full access to the game’s functionality and content as well as all updates that have been released since it came out in March, including new PvP maps and the Renegade Campaign.

A central feature of BattleForge is its unique trading card component, built around a “fully enabled, online collectible community,” which lets players build customized armies using CCG-style cards that represent spells, buildings and units on the battlefield. The Play4Free release will include 32 of the game’s 200 cards and players will be able to participate in the BattleForge Auction House and trade directly with other players once they reach PvE level 4 and PvP level 10.

EA announced Play4Free, which offers free gameplay supported by advertising and microtransactions, in early 2008. Other games planned for the Play4Free series include the online FPS Battlefield Heroes and Need For Speed: World Online, a multiplayer racing game.

The retail version of BattleForge, which is still available for $29.99, comes with cards from all four of the game’s factions and 3000 BattleForge Points that can be used to buy new in-game cards; owners of the Play4Free release who want to expand their decks can do so by purchasing points online. Learn more and grab your own copy while you’re at it at www.battleforge.com. Hey, it’s free!