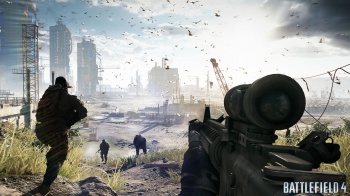 DICE is ready to leave the fight for the best engine behind.

The Frostbite engine that powers the Battlefield series may be known for its photorealistic graphics, but impressive visuals can only take you so far. After all, fans of the series will probably enjoy exhilarating gameplay moments more than they’ll appreciate being able to count the nose hairs on their target’s character model. Battlefield developer DICE seems to recognize this, and it looks like they’ve finally reached a point of diminishing returns with graphical fidelity. To that end, the design philosophies of Battlefield 4 are somewhat of a departure from previous entries: the technology is less of a centerpiece and more of a means to an end.

Bach likens the current obsession with advanced game engines to talking about car engines. There was a time when you could sell a car on the virtue of its engine alone, but now the differences are so negligible that a good engine is expected and it’s the experience that matters.

“Next-gen needs to be more than just more polygons,” Bach stresses. “To us, it’s like, how do we evolve the gameplay? How do we evolve the narrative? How do we evolve the things around the technology? How do we make it more Battlefield?” He noted that the team is trying to stay away from some of the trends in modern shooters that detract from interactive gameplay – rather than rooting the player in place to show them a fancy pre-animated set piece, players should be living their own set piece moments as part of the fundamental gameplay. “Technology is not an issue for DICE anymore. We have one of the best game engines in the world. You can’t win by having a slightly better engine. You win by having a better experience.”

This is a pretty radical attitude for a big-name AAA series like Battlefield, but it’s a healthy one. With less effort being spent on making the biggest maps or the crispest aspect-particle turbo-shaders, DICE can afford to be more creative in the parts of the game that will keep players talking long after release day.