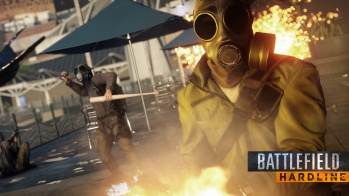 EA claims the Battlefield: Hardline delay is so they can add “more innovation” to the game.

If you, like me, booted up the Battlefield: Hardline beta and were dismayed to discover it was, at best, a mod of Battlefield 4, and, at worst, a buggy mess, you may be relieved to hear that EA games is taking it back to the shop, delaying its original October 2014 release date until “early 2015”. EA says that this delay is mostly due to feedback from the beta, and gives the Hardline team more time to further “innovate” the game.

“[Battlefield: Hardline‘s beta] feedback also spurred us to start thinking about other possibilities and ways we could push Hardline innovation further and make the game even better. The more we thought about these ideas, the more we knew we had to get them into the game you will all be playing,” said EA in an official blog post. It outlined three major points that developer Visceral Game will be focusing on:

“We are doing all of this for one reason. Because we want Battlefield: Hardline to be the best game it can be, and so that we can create the best environment for a smooth launch for our players,” stressed EA.

What do you think? Is a few extra months enough time for Visceral to “fix” Hardline, or is it already a lost cause?

The Great Old Ones Await…