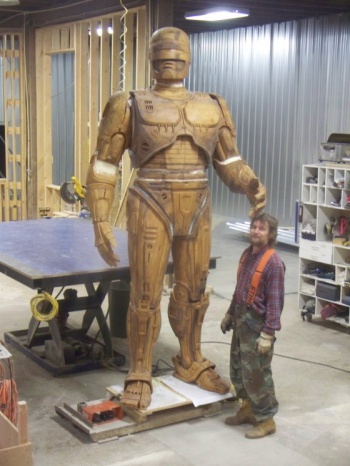 Imagination Station Detroit’s RoboCop statue project is almost upon us, and it has revealed some magnificent photos of the work-in-progress statue.

Detroit served as the setting for Science-Fiction epic RoboCop. This garnered a lot of mixed reactions for the city. On the one hand, it didn’t help Detroit’s stereotype of being a haven for violent crime and terrible people. On the other hand, RoboCop is awesome. So it should come as no supprise that when Detroit’s Mayor asked for ideas on how to revitalize the city, a giant statue of RoboCop himself was one of the top suggestions. After he shot down the suggestion, angry citizens took to crowd funding platform Kickstarter to fund the project themselves.

The Kickstarter reached its funding goal back in 2011, and Imagination Station Detroit has been providing procedural updates on the progress of the statue since then. It has now finally revealed an almost-completed version of the statue.

“There’s really nothing to say,” said the team in a statement accompanying the photos, “Just take a look at RoboCop in his 10-foot-tall pixel-atom-perfect glory. So far he’s passed from you, the backers, to Fred Barton’s expert custom sculpting, to Across The Board Creation’s 3D scanning, digital enlarging, physical fabrication, and assembly in foam, wax, clay, and steel (pictured below), and now he’s headed to Venus Bronze Works in Detroit for casting and manufacturing in bronze. We bow to all parties for going above and beyond.”

Behold, Detroit’s soon-to-be RoboCop statue in all its glory:

“He’s not done yet,” says the team, “but what you’re seeing in these pictures is pretty much exactly how he’ll look. We hope you love it as much as we do, and we hope you send good vibes to all the craftsmen and the production team who’ve run across the obstacle course to get here, as we all send good vibes back to you, the awesome, patient, and hopefully super happy backers!”

I only hope that they put this statue right outside of Detroit Mayor Dave Bing’s house, so that every day he can be reminded of how he shot down the most badass idea that an American city has ever had.