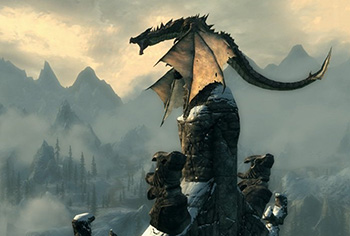 Bethesda is moving on to its “next adventure,” meaning the company won’t create any more content for The Elder Scrolls V: Skyrim.

Sad news for Skyrim fans: There’s no more downloadable content in development for the game. After the Dawnguard, Hearthfire and Dragonborn expansions, it seems that the development team wants to work on something else.

“Skyrim has been a labor of love for us since we started designing it in 2006,” reads a new post on the official Bethesda blog. “We never imagined it would become the phenomenon it has. And that is because of you, the fans. It was all of you who made it a success. We can’t thank you enough for embracing the game, spreading the word, and making it your own.”

“For the last year and a half we’ve been working on new content for Skyrim; from the game updates, Creation Kit, Steam Workshop, Kinect support, to DLCs. Parts of our team have also been in pre-production on our next major project, and that game is at the point where it requires the studio’s full attention to make it our biggest and best work yet.”

Despite this, Bethesda claims that it will continue to support the game, issuing bug fixes and patches for the various versions of Skyrim as necessary. “We’ve invested so much of ourselves into Skyrim and will never truly say goodbye to it,” the company claims.

While Bethesda is done with Skyrim, PC players at least have the wealth of user-generated content built by the Skyrim community to keep them busy for the next millennia. Console users have no such luck, but with the initial size of Skyrim coupled with the additions made by the game’s three major DLC packs, there’s plenty there to keep you occupied for quite some time.

Now, more crucially, what’s this “next adventure” Bethesda mentioned? We’ve known about The Elder Scrolls Online for quite a while and if the blog post were referring to that game, why not simply mention it? This secrecy leads me to believe that Bethesda has another project in the works, one we don’t know about, that the Skyrim team has been assigned to work on. It’s too soon for another singleplayer Elder Scrolls game, but Bethesda does have another big RPG franchise that’s due for a sequel at some point soon. A franchise with a more dedicated focus on guns and technology. A franchise that you might describe as “post-nuclear.”

Ah, but that’s just wishful thinking. I know as little about Bethesda’s next project as any of you. Still, I’m keeping my fingers crossed.