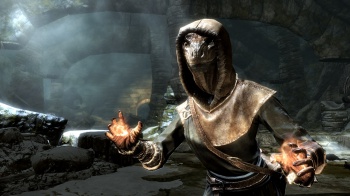 Last week, while answering questions on Formspring, Obsidian’s Joshua E. Sawyer took a stab at diagnosing Skyrim’s severe lag issues. He posited that the game’s lag and microstuttering, which is most obvious in the PS3 version, is an engine issue, and claimed that New Vegas had exactly the same problem. Pete Hines, Bethesda’s VP of PR and Marketing, reckons Sawyer doesn’t know what he’s talking about.

When asked about Sawyer’s comments on twitter, Hines responded: “Josh Sawyer did not work on Skyrim nor this engine and his comments don’t reflect how the current tech works.”

When asked if Sawyer’s claims “scare” Bethesda, Hines responded in the negative. “No, it isn’t true,” he said. He brings up issues we solved long ago.”

Bethesda claims the recently released 1.2 patch has “fixed the long-term play issues for most PS3 users” but also admits that “this is not the case for some.” It’s promised another patch to increase game stability and fix the problems introduced by the last patch. I must admit, watching the people at Bethesda trying to fix bugs in their games is hilarious. It’s like watching a man trying to arm wrestle a swarm of bees.