Bethesda’s parent corporation is involved in a dispute over the trademark for Scrolls – the word conflicts with the Elder Scrolls series. According to international trademark law, if Bethesda doesn’t fight Mojang’s claim, it makes it much harder to defend their ownership of Elder Scrolls in the future. Of course, all the legal mumbo-jumbo doesn’t mean the developers at Bethesda Softworks do not respect all Markus “Notch” Persson has done with Minecraft. To prove it, over the weekend, careful players of Skyrim found an Easter egg tribute to Mojang’s breakthrough game. 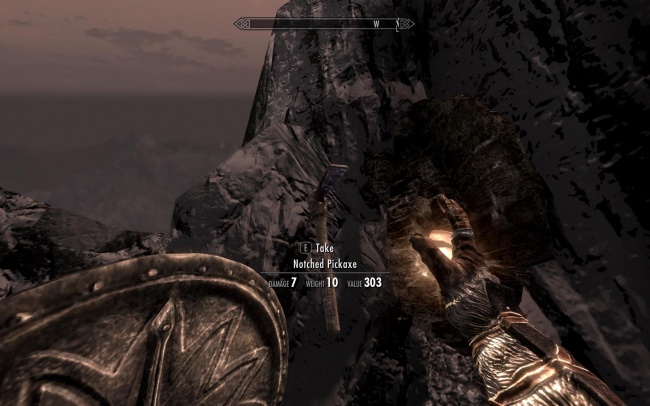 On the top of a mountain called the Throat of the World in Skyrim, you can find a conspicuous artifact embedded in the rock. Examination will show a mining pick that looks a lot the implement used in Minecraft. Even the name of the tool – “Notched Pickaxe” – has a familiar ring to it.

I have yet to discover the pick myself – I’ve only just created my High Elf fighter/mage last night – but I’m glad the Easter egg is there in Skyrim. Let the lawyers battle it out in court; the people who actually program and design games at Mojang and Bethesda still have a healthy respect for each other.