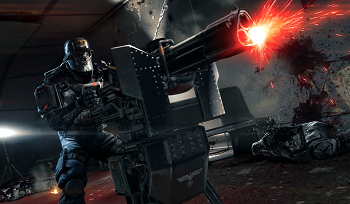 According to marketing VP Pete Hines, Bethesda intends to keep its focus on just a few good games at a time.

Some publishers like to be big, casting a net so wide that it’s hard to keep track
of their many and various game releases. Others, however, opt to play a different game, investing in fewer titles but putting out products that arguably possess a longer lasting appeal. Bethesda, the company behind acclaimed titles like Fallout 3, Skyrim and Dishonored, would consider itself a member of that second group.

Speaking recently at QuakeCon, Pete Hines, the vice president of PR and marketing for Bethesda, affirmed the company’s dedication to quality over quantity. “We don’t want to be a publisher that is publishing 20 to 30 games a year, that’s not who we are,” he said. “We’re more about fewer premium titles and putting our full attention behind those.” According to Hines the end goal of this strategy is to put out the best games the company can manage. “If it’s one a year, or two a year, or three a year or four a year, what’s most important is backing the best bets, putting our full support behind those and making them great.”

Granted, there are some financial advantages to having your company’s fingers in a lot of pies. That said, The benefits of Bethesda’s strategy aren’t hard to pin down. Skyrim, for instance, spent several years in development and emerged to be widely regarded as one of the definitive games of the current generation. Sometimes, it just comes down to the respect of your audience being worth more than short term dollars.