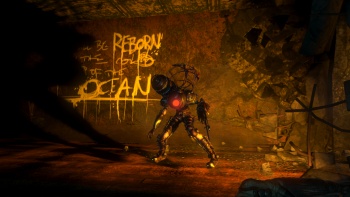 Take-Two Interactive has revealed that Dark Sector developer Digital Extremes will be creating the multiplayer component for BioShock 2, a “prequel experience” set during the fall of Rapture.

Gamers in multiplayer will take on the role of Plasmid testers for Sinclair Solutions, a Plasmid and Tonic seller in the underwater city of Rapture. Players will have the opportunity to see the city before its collapse into anarchy, with many well-known locations like the Kashmir Restaurant and Mercury Suites completely rebuilt for “fast-paced” action. As everyday Rapture citizens, the city’s lore will be opened even further as players learn more about the great Utopia’s rise and fall, and gain experience points during battle to earn access to new weapons, Plasmids and Tonics.

Digital Extremes’ Dark Sector was released in March 2008 to decidedly average reviews, but on the upside the game was banned in Australia for its high level of violence. The studio has previously partnered with Epic Games on the Unreal Tournament series and assisted 2K Games with the development of the PlayStation 3 version of BioShock. BioShock 2 is currently scheduled for release near the end of 2009 for the PC, Xbox 360 and PS3.