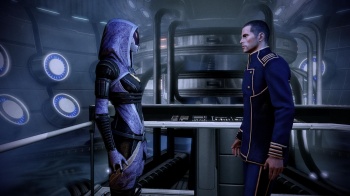 It might not be entirely sure what Tali’s face looks like, but BioWare wants to know if you want to see it.

It seems that BioWare is having a hard time deciding whether or not to show the face of Tali, Mass Effect’s Quarian crewmate, whose weak immune system means she has to hide inside an environment suit at all times. So, to help the studio make its decision, it’s asking its fans whether or not they want to see her face in the first place.

BioWare asked fans on its BioFeed and Mass Effect Twitter accounts. The reaction to the question has been predictably mixed, with some fans keen to see what she’s got under her mask, and others wanting BioWare to preserve the mystique. “No, keep her an enigma. Too many things get spoilt by people’s need to know!” said one commenter. “Yes, yes, yes!! Just please don’t let it be a [sic] “I want to show you my face before I die” kind of scene,” said another.

What Tali looks under her mask has been the subject of all kinds of speculation ever since her appearance in the first Mass Effect game. Some want her to look beautiful and other want to looks like “a cross between a Predator and Dr. Zoidberg,” while others want Tali to look like her voice actress, Liz Sroka.

Luckily – or sadly, depending on your point of view – if BioWare does decide to show her face, supporters of the squid/mandibles camp will probably be disappointed. It’s suggested that she has a human-esque face – you can make out a nose through her helmet’s visor – and the romance scene in Mass Effect 2 where she kisses Shepard pretty much confirms that she has lips. Of course, there’s a lot of room for variety, even in that familiar format.