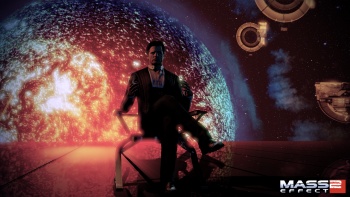 Some players of Mass Effect 2 have complained that the text is hard to read on their standard definition televisions, but BioWare said they cannot fix the problem.

Even though many gamers now have HDTVs, there is still a significant amount of people who play using older standard definition televisions. According to some reports, the text in Mass Effect 2 is very difficult to read because of it’s size. BioWare said that they are aware of the issue, and the they looked into fixing the game. Unfortunately, it is not something that can be repaired with a patch or a title update, in Xbox Live speak. The company representative did say that the designers at BioWare will keep the issue in mind when they make Mass Effect 3.

“We understand that on some Standard Definition TVs the smallest text in Mass Effect 2 can be difficult to read,” said community representative, Michael Gamble, in a post on the technical support forum at BioWare. “While this was not an intentional result, it was a byproduct of enhancements to the user interface.” He went on:

After investigating potential solutions, we have determined that while this issue does affect a small portion of SDTV owners, we are unable to resolve it for Mass Effect 2 through a title update.

However, we have taken note of this issue and will take it into consideration as we plan future games in the Mass Effect franchise.

In the past, gamers complained about unreadable text on SDTVs with other games, and some were able to be fixed through patches, such as Banjo-Kazooie: Nuts & Bolts. It is unclear why Mass Effect 2 is unable to be patched in this way.

Perhaps it’s because the game is set so far in the future that standard definition televisions are only a myth lost in the sands of time.