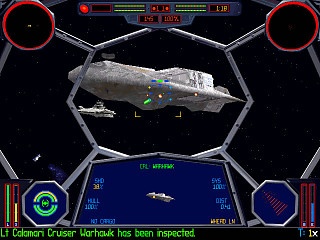 Though BioWare had already confirmed that players of its Star Wars MMORPG would get ships, now we know they’ll be used for more than decoration.

BioWare held a “reveal mission” before the currently ongoing San Diego Comic-Con, asking fans to “like” Star Wars: The Old Republic‘s Facebook page and to follow the game on Twitter in exchange for a big reveal at the convention. Though the number of followers didn’t quite reach the amount asked for, The Old Republic‘s community manager Sean Dahlberg let the reveal fly anyway, confirming with a forum post that the upcoming MMORPG will feature space combat.

This is great news to an old-school X-Wing and Tie Fighter fan like myself (best flight combat games ever), but what does it really mean for the game? Sadly, we don’t know just yet, but Dahlberg did write that space combat will be “an alternative gameplay experience to the primary game of storytelling, questing, and ground-based combat.”

“In space combat, you fly your personal ship to various ‘hot spots’ on your galaxy map,” he continues. “From there, you will blast your way through asteroid fields, enemy fighters, frigates, destroyers, and a variety of other obstacles that will evoke memories of some of the great Star Wars space battles.”

Because Dahlberg is calling the space combat experience “alternative,” I’m going to guess that means it won’t simply replicate ground-based combat in space, and will possibly be more fast-paced and similar to LucasArts’ classic Star Wars flight sims. We won’t have to wait too long to find out, as the October issue of PC Gamer (which hits newsstands on August 17) will apparently contain a full reveal with screenshots. After seeing the recent gameplay videos of The Old Republic and now with the addition of space combat, I think I’m quickly becoming an Old Republic fanboy.