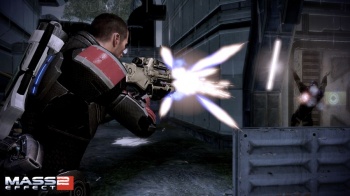 A multiplayer version of Mass Effect has been a rumored BioWare project for a while, but only just now is the studio starting to admit that something might be in the works. In the latest issue of Game Informer, Mass Effect project director Casey Hudson doesn’t confirm any such project, but he says that an MMO would fit the franchise.

“We’ve been trying to think of a way that makes sense for people to experience Mass Effect with their friends,” Hudson said. “We haven’t yet come up with a way to do that, so we don’t have anything to announce at this time, but obviously multiplayer is something we want to do more of in the future as a company.”

Hudson also said that an MMO would “make sense” for the Mass Effect universe. “I think Mass Effect has that quality to it,” he added. “If you get rid of the Reapers and win that, wouldn’t it be amazing to just live on the Citadel or just take a ship to Omega? That makes sense.”

BioWare is already working on Star Wars: The Old Republic, so expecting the studio to have another MMO in development at this time seems like a stretch. However, when Old Republic calms down, perhaps the Mass Effect MMO is up next.