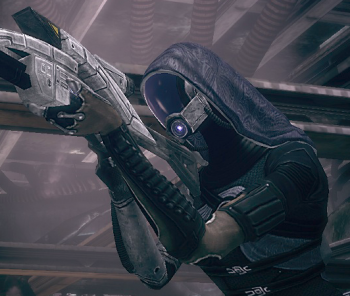 Some Mass Effect fans are incensed that an in-game image of Tali is based on a stock photograph.

In the last year or so, BioWare has shouldered its fair share of criticism. Casting Jessica Chobot as a voice actor and the failures of the leaked Mass Effect 3 endings are just a few signposts of the massive gamer rage leveled at the company from Edmonton about its sci-fi epic. Now that Mass Effect 3 is out, the public is ready to heap more criticism on BioWare’s latest opus by pointing out the use of a piece of altered stock photography in the game.

Mild ME3 Spoilers ahead. Stop reading now or forever hold your peace.

The character of Tali’Zorah wore a mask throughout Mass Effect and its sequel. We’ve never seen her face, until Shepard finds a photograph of the quarian without the mask in ME3. Somehow, a few gamers remembered seeing the image of a brunette female with the sun behind her in a catalog of stock images from Getty, a service that supplies images for all creative endeavors. Several angry posts were made on BioWare’s forums and various gaming outlets with links to both the original image and comparisons pointing out the similarity. Many decided this was unforgivable.

Matthew Leete photographed the original image and licensing it costs at least $15, which BioWare conceivably did before artists there altering it to look a bit less human. The image comparison in the spoiler tag below clearly shows a few markings on Tali’Zorah’s chest and white eyes to denote her as a quarian.

Major STORY spoilers in this image:

Marvel Movie History For Sale in The First Avenger Auction