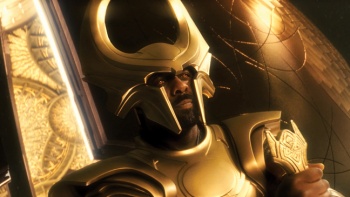 Magic and monsters are fine, but a black guy playing a Norse god? That’s taking things too far.

Idris Elba, who plays Heimdall in Marvel’s Thor movie, has spoken about the backlash caused by the casting of a black actor as a Norse god. Elba’s casting has infuriated a number of groups who feel it is insulting to have a person of color playing a figure often referred to as the “Whitest of the Gods.”

Elba indicated that complaints about his casting came in two types: There were the purist comic books fans who were upset about the changes made to the canon – Heimdall is depicted as white in the comics – and then there were others whose complaints were solely motivated by race. He was reluctant to speak about it too much though, as he didn’t want to fuel the issue. Ultimately, he said, if people didn’t like the casting decisions, they should just stay at home and not see the movie.

Sadly, the fan backlash against Elba’s casting is not a new phenomenon – Penny Arcade tackled it in a comic late last year – and it isn’t the first time that Elba has talked about it. Just over a year ago, he said that Thor had so many fantastical elements that he was amazed that anyone would pay attention to the color of his skin. He acknowledged that he didn’t really look like the traditional image of a Scandinavian, but said that in future there would be more diversity in Hollywood casting. “I was cast in Thor and I’m cast as a Nordic god,” he said. “If you know anything about the Nords, they don’t look like me but there you go. I think that’s a sign of the times for the future. I think we will see multi-level casting. I think we will see that, and I think that’s good.”

Unfortunately, that’s not an opinion shared by his detractors. Some of the Elba’s staunchest – although ostensibly not racially motivated – opponents accuse Marvel of left-wing social engineering, noting that it attacked the Tea Party movement in a recent issue of Captain America, and that Stan Lee is known to support left-wing politicians. Other complainants, who are more directly racist, talk about the “filthy culture of judaism [sic]” and how Elba’s casting is an attack on “White Culture.” While the latter accusation is both disgusting and ridiculous, the former – that the left wing is using the media, and especially Hollywood, as a vehicle for propaganda – is not new. It was also leveled at DC Comics following the news that Superman was going to renounce his US citizenship.

Although Elba doesn’t look like a typical viking, it’s not as if he’s playing a historical figure, and it’s hardly the only liberty that Marvel has taken with the Norse pantheon. As insults go, saying that the Norse gods were actually aliens with some really advanced technology – which is actually true in the Marvel canon – would seem to be much worse than casting a black actor as Heimdall, but strangely, no one seems to be bothered about that fact. All joking aside though, race in the media is a delicate and difficult subject, whether you’re talking about the accusations of “whitewashing” in The Last Airbender movie – which is the casting of white actors as characters of color – or the accusations of racism in Resident Evil 5. It’s an issue that people need to keep talking about though, because like any serious issue, it’s not going to go away if we just ignore it.