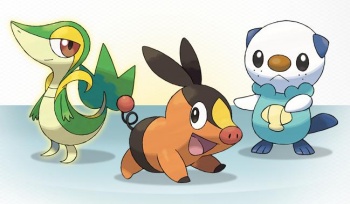 The Black & White Pokemon vying for Pikachu’s spot in your heart were given their official English names today.

Rejoice, Pokemon fans. Today is the day that you can start referring to the upcoming Pokemon Black & White‘s starter Pokemon by their official English names, as the Pokemon website has just brought them down from up on high.

Until now, the three starters were referred to by their Japanese names: Tsutarja, Pokabu, and Mijumaru. Gone is the storm cloud that once obscured these creatures’ true names from your sight. Well, I guess technically the Japanese names would actually be their true names, but… the titles released today are the true names to you if you live in a region that sells the English version, okay?

Grass-type Pokemon Tsutarja’s new name will be Snivy, fire-type Pokabu’s is Tepig, and water-type Mijumaru receives the very Metal Gear-like name of Oshawatt. Is it wishful thinking to hope that the water-type’s evolutions will add “Revolver” and “Liquid” to its name?

The new Pokemon Black & White website gives some statistics for each of the starter Pokemon, while also covering the games’ legendary cover stars, providing a few details on the Unova region, and showing a bunch of screenshots, but nothing all that mind blowing. It’s possible that the site will host more reveals in the future, such as the starter Pokemon evolution names, and the titles of the rest of the bunch. According to the website, we’ll get to play with Snivy, Tepig, and Oshawatt in spring 2011. Which will you choose first?