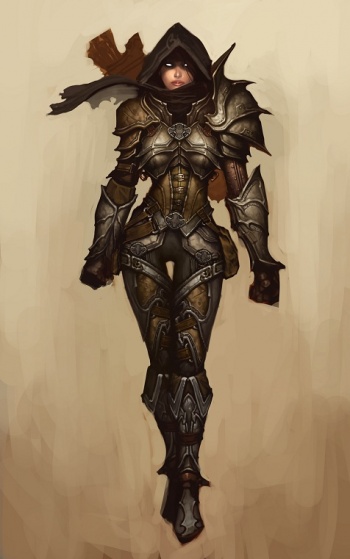 What do giant toads do? They eat monsters, duh.

A collection of Diablo III developers took the main stage at BlizzCon 2010 to discuss the changes in the eagerly anticipated upcoming hack-and-slash.

The panel initially started discussing the new Demon Hunter class, revealed earlier at the keynote. The initial design of the Demon Hunter had been a classic Ranger-style character, but the woodland ranger didn’t feel very Diablo-esque. The developers toyed with twists – more melee elements, making the character a big bulky demon who hunts other demons – but found that none of them worked.

In the end, they decided on something that worked as an explicit counter to the noble Monk class, something sleek, dark, gothic and even sexy (for both genders). The Demon Hunter was an antihero, bent on getting revenge on the demons that had slaughtered her loved ones, and she wasn’t afraid to play dirty. Demon Hunters, unlike the other classes, were chosen instead of born – they could come from any walk of life, and were hand-picked by other Demon Hunters to join their ranks. They live to make demons feel the fear that they instill in humans – so they really are like Batman.

Demon Hunters use ranged weapons (dual-wield pistol crossbows) and gadgets – a bola shot that immobilizes the enemy and then explodes, and spike traps that they can lay on the ground in preparation for their foes. Their grenades can be bounced around corners, and Demon Hunters can use their Vault ability to acrobatically maneuver around the combat zone.

The panel then discussed general changes to the Diablo III mechanics. The skill tree list – similar to WoW‘s talent trees – we saw last year at BlizzCon was large and unwieldy, they found. An attempt to “tab” the trees didn’t work, as players often forget to check all their other tabs, and couldn’t see all of their skills at once.

The current form is a list that pops out to the side with all your potential skills, so you can see every one of your options at once.. You have seven slots that unlock as you level up, and can choose any number of level-appropriate skills for the given slot (and can, of course, put more points into them as you desire – this is Diablo, after all). The Barbarian can put his points into an Ancient Spear attack that gives him some range, the Wizard can call down a Meteor, and the Monk can choose to grab Wave of Light, their version of Dragonball‘s Kame-hame-ha.

what’s interesting is that Diablo III now splits passive abilities and active abilities (your attacks and spells) apart, instead of having both in one tree. Passive abilities are called Traits, and have little excerpts of “flavor text” that explain the fiction of your chosen character class. These traits are archetypes that help customize your character as you please – one example, for the Barbarian, was a trait that increased the Rage you got for hitting enemies.

Character customization is what Diablo is all about, but the old D2 system of stat allocation was unintuitive and left new players confused. In the old skill tree system (as in WoW), players felt like they were expected to spend points on passive abilities that made them stronger, rather than on fun skills and new attacks they could use – which is why the Traits and Skills are now separate pools.

The character customization is bolstered by the new Rune system – Runes customize skills, changing what they do and how they act. There are five types of runes: Crimson, Indigo, Obsidian, Golden and Alabaster. Every rune applies a different effect when it’s joined to a different spell, and runes themselves can be upgraded. While the Wizard’s Magic Missile spell on its own just shoots a single projectile, pairing it with an Indigo Rune (Rank 1) will make it shoot three projectiles. Pairing it with an Indigo Rune (Rank 7) shots an absolutely insane number of projectiles – Blizzard just decided to think up as many “crazy ideas” as it could.

The Runes seem to be one of the most entertaining new parts of Diablo III. We got to see how they’d affect the Witch Doctor’s spell, Plague of Toads. Depending on the rune applied to the spell, the Witch Doctor can summon flaming toads, a Rain of Toads that falls from the sky and explodes, or a single Giant Toad.

What does the Giant Toad do? It eats monsters, but it doesn’t digest the loot.