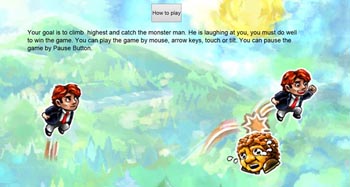 Three games resembling platformer Braid have made their way to Microsoft’s Windows store, even taking names similar to the original. Last night Braid creator Jonathan Blow tweeted links to the three free games that use assets from his game.

The three games are called Breid, Brady’s Adventure, and Braidy Jump. The three have a playable character unabashedly resembling Braid‘s protagonist, Tim. They also have similar backgrounds, enemies, and platforming mechanics. However, it’s unknown if these apps use Braid‘s time manipulation mechanic.

Both Brady’s Adventure and Braidy Jump are published by Gameshark, not to be confused with the GameShark cheat cartridges. Breid, in which the player controls Tim lookalike “Taem” to climb as high as possible to the top of a tree, was published by Hakan Akdemir, who interned at Microsoft’s Middle East and Africa Headquarters, according to his blog.

Braid artist David Hellman released some graphics for fans to use, and when asked about their use for “other independent (but potentially commercial) games,” he responded that the materials could be used “however you want.” Hellman is encouraging of those who want to make comics and papercraft work using his work on Braid.

Because Hellman has provided no restrictions on use of the art, developers (and people in general) are allowed to use it. For example, the screenshot from Breid on how to play uses two of the transparent PNG files Hellman made available. Given that the three apps are free to download and Hellman made no restrictions to use of the art he released, Breid, Brady’s Adventure, and Braidy Jump probably don’t infringe on copyright — even if it’s disappointing to see clones available. Hellman could rescind the license and ask Microsoft to remove the apps from its store if he wanted.

Catlateral Damage: The First Person Feline Game That Wants To Break Your Stuff

Spirited Away Built Brick By Brick In Minecraft