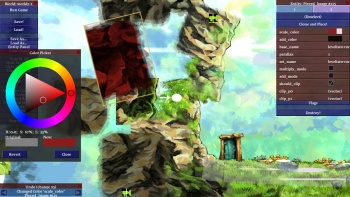 Hidden in the PC and Mac versions of Braid is a fully-featured level editor that will let aspiring Jonathan Blows create their own Braid levels, and, potentially, full games.

Do you want to be like Jonathan Blow? Innovative, successful, intelligent, outspoken, bald? You can give it your best shot with the PC and Mac versions of Blow’s seminal time manipulation-centric puzzle platformer, Braid, which contains a hidden level editor with some pretty powerful tools.

Blow hasn’t publicized the editor at all, but some intrepid Steam users discovered evidence of the tool inside the recently released PC version of the game. All you need to do to access it is run Braid with a “-editor” parameter and then hit F11 when you’re in game, and voila, you can start putting together your own trippy levels in no time. I’m going to fill mine with that dinosaur that showed up in that one stage and made the Mario reference.

But wait, how does this thing even work? It seems pretty complicated, and I’m no good with computer. Luckily, Blow didn’t just stick the tool in his game for users to befuddled by. He’s planning on releasing documentation for the editor once he puts “a new version out in a few days that fixes the problems some people are having, and when more people have played/finished the game.”

“The way it works is you can make levels with the editor (up to a full game, potentially) and run that with -universe later,” Blow said, adding that he’s planning on releasing a tool that will allow you to import Photoshop files into the editor so that users can add their own graphics.