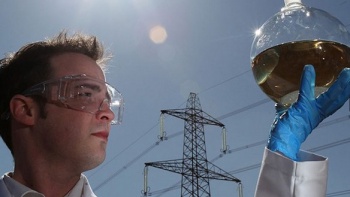 A company in England has made gasoline out of CO2 extracted from air.

The company Air Fuel Synthesis, located in northern England, has proven the concept that fuel can be made from a synthesis of water vapor and clean air. The proof of concept machine the company is currently operating has produced five liters of fuel since August. The resulting fuel is fully compatible with the current transportation grid, and if removed from the tank would run any existing gas powered vehicle. “There’s nobody else doing it in this country or indeed overseas as far as we know. It looks and smells like petrol but it’s a much cleaner and clearer product than petrol derived from fossil oil,” said Peter Harrison, the chief executive of the company. The company hopes to have a commercial scale plant up and running by the end of 2014.

The fuel creation process is currently powered by the existing electric grid, and so any clean fuel produced now is actually made using mostly fossil fuels. If the conversion plant were powered by a renewable source of energy, such as wind or solar, then the resulting fuel would be a messiah of green fuels. The clean gasoline would solve the problem of solar and tidal energy rich areas in that it would make that energy easy to transport in a liquid form. At the same time, it would actually remove carbon from the atmosphere, carbon production being the primary problem with burning fossil fuels. The company is currently working on two fuels, a standard and an aviation fuel. The first step for the company is likely to be to blend their product with conventional fuel to make fuels for motor sports.

The company’s findings have been independently verified by the Institution of Mechanical Engineers in London. Apparently, this technology has existed for some time and been achievable, being based on already known principles. Air Fuel Synthesis, however, is the first to actually put all the pieces together and show it can work. While it’s obvious that a full scale application of this technology, let alone the day that the tech is cheap enough to be economically feasible, is a long way off, I think I’ll take it as an acceptable alternative to Mr. Fusion from Back to the Future II. At least until I can get my hands on a Mr. Fusion.