Tanya Jessen is making waves as the producer of Epic Game’s latest – and perhaps most profane – shooter (See: Dicktits), but she wasn’t always at the helm of production. In fact, like a lot of people breaking into the games industry, Jessen got her start in QA. 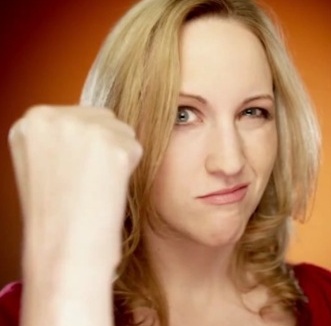 “I got my start as like an entry level game play tester in the sports group [at Microsoft], and I worked my way up,” says Jessen. Production wasn’t even on her radar until after she’d spent some time working with Epic’s epic producer, Rod Ferguson.

“I never wanted to be producer,” says Jessen. “I had worked with a lot of producers and I just didn’t see it as my kind of job until I worked with Rod. Rod showed me how important and how good that role can be when you’re really in the thick of it and working with the team that person is kind of like the hinging point for making everything kind of work. After I got to work with him, I knew that that’s was what I wanted to do. ”

Essen has been a gamer her whole life, heavy in RPGs and “really into MMOs.” Her work on Microsoft sports convinced the MS brass to give her a chance in the RPG group, and soon she found herself working on such titles as Jade Empire, Dungeon Siege and Vanguard, before that title moved to SOE.

“At the time,” says Jessen, “I had been following Gears of War for a little while, and I knew that [Microsoft] had a relationship with Epic and everything. And I was a huge fan of Unreal from back in the day, and so I was like going to my boss [and saying], ‘I don’t know if you need anybody for the Gears team, but hey …'”

As it happened, there was a job available working with Epic – Team QA Lead – but there was a catch: Jessen would have to move from Seattle to North Carolina.

“I had literally the day before put an offer in on a house,” she says. “Well, I didn’t really think that I would ever be … I mean I never considered for a moment that I would be going to work for Epic. I’d be like ‘OK I’ll go out there a few weeks on, a few weeks off and work on Gears,’ which I wanted to do so badly and that’ll be good. So I thought about it for like a day and then said, ‘Alright. Ship me out there.'”

The rest, as they say, is history. Jessen worked for six months at Epic’s offices in North Carolina and at the end of her tour walked right up to Ferguson and asked for a job.

“They were like, ‘Well, you did kind of just have a 6 month interview.,'” says Jessen. She says they were reluctant to poach from one of their partners, but encouraged her to give them a call if she ever left Microsoft.

“So I interviewed for a bunch of companies,” says Jessen, “and then I called Mike Capps [Epic President] and was like, ‘I have a bunch of job offers. Wanna hire me?’ And so he literally polled the entire company to see if everybody liked me after working with me on Gears.”

The good news for Jessen, is that everyone did. She was hired a week later and went on to work at Epic as a producer on Gears PC, Unreal Tournament 3, Gears 2 and now Lead Producer for Bulletstorm, the game that will soon be bringing “dicktits” into mainstream circulation.

Jessen on Bulletstorm: “At the end of the day, Bulletstorm is a combination of a bunch of things we like about other games. We’re just gamers, and we really love to play games. Bulletstorm is the game we wanted to play.”

Bulletstorm will be released February 22nd for Xbox 360, PS3 and PC. Read our preview.