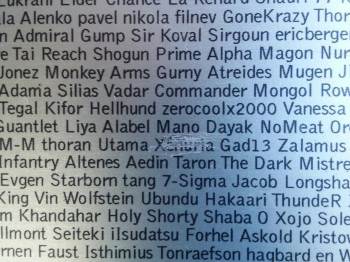 CCP Games says that whoever defaced its real-world monument to EVE Online is going to face serious real-world consequences.

Update: CCP announced today that four individuals responsible for the vandalism of the EVE Online monument have been identified and dealt with. “Firstly, I’ll say that the fact that the monument was vandalized is an insult to the entire community, not just to the individual whose name was directly targeted by the vandalism,” CCP Falcon wrote in a message posted earlier this afternoon. “Thankfully with the assistance of a number of members of the community, including some of those who were involved with the incident and other members of their own alliance, we’ve been able to make headway in identifying those responsible.”

Falcon said CCP considers the matter resolved “within the EVE universe,” and that any further action that may be taken, including possible criminal charges and recovery of costs to repair the monument, will remain confidential. As he indicated previously, the identities of those involved will not be revealed.

CCP unveiled its meatspace monument to EVE Online last month, a statue standing more than five meters in height that’s engraved with the names of all active, paying EVE players as of March 1, 2014. It’s a remarkable creation by any measure, and of course it only took a few days for someone to come along and mess it up.

“@Xenuria found your name and lost it again. #tweetfleet #eveonline #evefanfest,” someone using the handle The_Real_Gevlon tweeted on May 4. “You’re welcome, everyone in eve!” An attached image shows a small segment of the monument, with Xenuria’s name crudely scratched out.

CCP is notoriously tolerant of bad behavior in EVE Online, but is clearly far less willing to put up with this kind of guffola in real life. “This is damage of public property in the City of Reykjavik. The police have been informed, and investigation is ongoing,” Community Manager “CCP Falcon” wrote in the EVE Online forums. “This is not a laughing matter, and will be dealt with as a criminal offence. We are currently reviewing security footage from a number of surrounding buildings.”

“What’s happened is absolutely disgusting. It’s an insult to the entire community and is clearly the work a person who believes that behavior in a virtual world is a valid reason to make a real life personal attack on someone, and deface public property,” he continued. “We will not tolerate this.”

Falcon noted that players have already come forward with information about the crime, including some who are believed to be members of the culprit’s alliance. He also said that if the vandal wishes to confess before the net closes, CCP will “take it as a gesture of good faith after an extremely stupid act,” although how the admission will mitigate the circumstances – if at all – is left unsaid.

He also called on forum users to “stop pointing fingers and blaming people,” and demanded that attacks on the victim in the forums come to an end as well. “It’s not funny, it’s not clever. Take your rumor mongering and personal attacks away from our community,” he wrote. “If you choose not to, you’ll be removed from the community, permanently. It’s a simple as that. We will not tolerate victimization.”

In a follow-up post made earlier today, Falcon said CCP had been visited by a couple of players who “basically confirmed everything for us” and that he hoped to be able to provide further details tomorrow, although he clarified that personal information would not be released. “There’s no way in hell we’ll release anyone’s identities, character name, corporate affiliation or otherwise,” he wrote. “We will not be part of a witch hunt.”